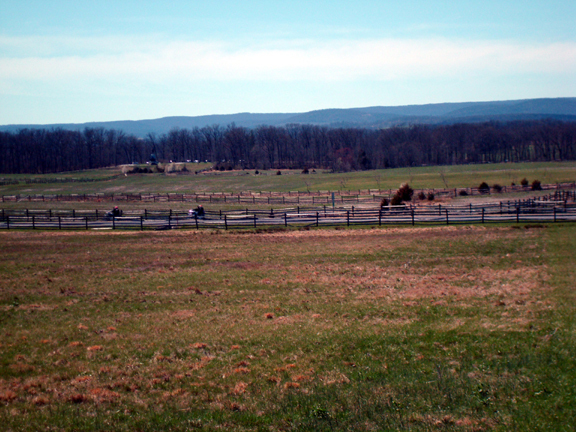 Back from the reunion in Staunton VA, and I completed the research at the Gettysburg Battlefield that was interrupted eight years ago by a heart problem. It wasn't book research. It had to do with a real unit in the North Carolina Infantry that my character was in, and whose individual members I had brought to life and followed through so many battles from New Bern all the way to Appomattox.

The unit was Company E of the 18th North Carolina Infantry, Lane's Brigade, Pender's Division, 3rd Corps. Its assault goal was just north of The Angle in what is popularly called "Pickett's Charge," but which in North Carolina is known as "Generals Pettigrew and Trimble's famous charge, sometimes referred to by the name of a Virginia officer."

The company's starting position, in the photograph, is just to the left of where those cars are parked in the distance. It is a little under a mile away. The view is from the Union position at Brian Farm on Cemetary Ridge. The original plan was to follow the steps of the 18th to find out if the ground had anything to say to me, and it did. I also was certain that the ghosts of that company would talk to me, at best; or give me a chill or two at least. Neither happened.

It wasn't July 3rd 1863, a hundred degrees Fahrenheit, with thousands of soldiers behind stone walls shooting down at me. I learned valuable things about the ground, however: where the men of Company E were in range, when the ground dipped and they were no longer in line-of-sight of the Union troops, when they were in open fields, when they were among trees, where the fences were, the streams and creek beds, the buildings, and so on. The novel is a work of fantasy, but the characters and background were very real. I'm grateful that I was well enough to follow those footsteps.

I managed to get my old GoPro working and made a video of my walk, and as soon as I can figure out how to piece it all together, I'll make it available.

Privacy Policy
ON READING MANUSCRIPTS NOT GOING TO BE AT READERCON THIS YEAR DC SWAMP THINGS Gettysburg Survivor This will be the subject line of the newsletter email New Posts, Good Health, and Much Writing Writer's Paint Box by Barry B. Longyear available 11/12 Writer's Paint Box Big Doings In Schenectady This Weekend Changes End of Year Stuff Wizards Meeting - Don't Miss The Train

All Barry B. Longyear Books & Kindles